How Safe is Syria?

There are reported cases of coronavirus in Syria and to control the spread, authorities have put measures in place. The region of Saydah Zainab in Damascus is in lockdown and a curfew has been imposed in all Syrian provinces each Friday and Saturday between 12:00 and 6:00. To avoid contracting the disease, apply good hygiene practices, maintain social distancing, avoid unnecessary gatherings and travel.

The overall travel advice for Syria is that it is highly recommended against travelling to any parts of Syria unless absolutely necessary. Anyone already in the country should seek to leave immediately. The country is in a state of ongoing conflict with widespread fighting that is affecting most of the country, including the vicinity of the airport. There is no available consular assistance in the country and you will not be able to receive help if required. As such, it is urgent that you leave the country at all costs.

On the 09th of October 2019, after US troops were pulled out of Northern Syria, the Turkish Army invaded Syria launching an offensive against Kurdish militias of the Syrian Democratic Forces (SDF) which have controlled the cross-border areas in the North. In the past, the US had helped SDF to capture territory once held by the jihadists in the east. SDF have claimed that they have imprisonned 12,000 suspected IS members, it is feared that with Turkey's invasion they could escape.

On the 17th of October 2019, Turkey agreed a temporary 'ceasefire' to give the opportunity for Kurdish-led forces to withdraw from northern Syria, although it is not certain that they would fully comply.

Since the conflict started, the Syrian government under President Assad’s regime have retaken major rebel strongholds and control most of Syria, including all of the south region. Whilst Kurdish forces controls most of the northeastern region and Turkish-backed rebels control north-western Syria. With Turkey's invasion, territorial divisions could change in the following weeks. 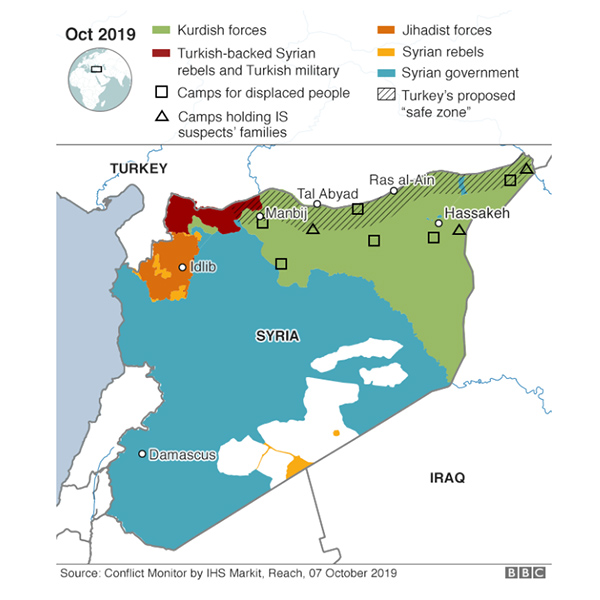 Last estimate by the Syrian Observatory for Human Rights reported that there had been 570,000 killed in the conflict. The UN currently estimates that there are 11 million Syrians displaced from their homes since the beginning of the conflict. It is considered to be one of the worst humanitarian crises in current times.

Recent Security Risk Events
The violent clashes between the government and anti-government protestors – often armed with dangerous weapons – means that there are frequent explosions, gun fire and disruption across the country.

The high threat of terrorism remains in Syria as continued attacks cause large numbers of fatalities and injuries on a regular basis. Airports are often closed down for lengthy periods of time with little warning if violence and threat increases in surrounding areas.

Along with the dangers of the conflict in Syria, there has been an increase in kidnappings in the country, particularly in Aleppo and Damascus. This poses extreme danger as many criminals involved in kidnappings actively select Western foreigners and are often undertaken by the terrorist group Daesh.

Be extremely cautious of public places and at all times keep a low profile in order not to attract particular attention. Avoid large crowds as these could lead to political demonstrations that could become violent. Be vigilant when entering Syria and avoid travelling alone and especially after dark. Do not take any photographs of public gatherings, military activity or anything that may be seen as a sensitive matter.

If you do stay in Syria despite all advice against this, ensure that you keep updated with local and national news and do not get involved in any conflict. You should also make sure that your travel documents are up to date to avoid trouble when asked to present them.

Since the ongoing civil war, Syria has remained increasingly isolated from countries in the region and many diplomatic relations have been severed with the wider international community.

Russia and Iran have provided Assad's regime military support since the conflict started. Russia has been a political ally since the beginning of the Syrian crisis in 2011 and is one of Syria’s most important international supporter in providing political and military aid. However, in September 2015, the Russian Federation authorised the use of armed forces in Syria targeting members of several rebel groups.

On the 14th of April 2018, the United States, the United Kingdom and France launched military strikes on Syria in the capital city, Damascus, following alleged chemical weapons attacks.

It is strongly advised not to travel to Syria as foreigners may be a potential target for terrorist attacks, assassination and kidnapping for ransom or political gain.

Due to the security situation and the high level of fighting and violence in Syria, road travel is particularly dangerous, with many roads being either blocked or closed. Driving standards and roads are also poor with an extremely high accident rate .Take extra precaution of major highways such as Tartous-Latakia, Tartous-Homs, Latakia-Aleppo, Homs-Hama, Homs-Damascus and Damascus-Jordan that are continuously closed.

Although there has been an increase in the number of security force checkpoints on major routes, make sure to check the status of all routes as some border crossings are led by opposition groups that could be a target for potential attacks.

There is a high threat of improvised explosive devices (IED) and landmines on roads throughout Syria. Seek local advice before travelling around locations such as Tadmur and Manbij. Avoid veering off main roads at all costs.

At the moment all emergency numbers including police are ineffective in Syria.

U.S. Embassy
The U.S. Embassy in Damascus suspended operations in February 2012. If you require emergency consular assistance, the Czech Republic Embassy acts as protecting power for U.S. citizens in the country, however they can only offer a limited range of services.

British Embassy
The British Embassy in the capital of Syria has withdrawn all staff and no can longer provide services or consular assistance. If you require emergency assistance you can visit any EU Member State’s Embassies. Alternatively, in an emergency you can call the FCO in London on (+44) 20 700 815 00.

Although travel to Syria is highly advised against, should you continue with your journey you must apply for a visa prior to departure for the country. This can be obtained from your closest Syrian Embassy or Consulate. If the length of stay exceeds 15 days you will have to get your visa extended at the immigration office to prevent difficulties when leaving the country.

Your passport must be valid for at least 6 months beyond the length of your proposed stay. If your passport contains an Israeli stamp it is highly likely you will not be allowed to enter Syria.

If you have never visited an Islamic country before, you maybe have some unanswered questions the culture, what you can wear and general dos and don'ts. Intelligent Protection International Limited is highly experienced at working in Islamic countries and has done so for the past decade. We have written a guide that will help you understand what is culturally acceptable and hope you find it useful. See our page: Guide to Islamic culture for travellers.

It is advised that visitors to Syria are up-to-date with primary boosters such as MMR. You should ensure that you have been further vaccinated against diseases such as Tetanus and Polio which is usually administered when you are a young baby - your doctor should be able to give you more information on this. You may also want to consider Typhoid and Hepatitis A vaccinations. Check with your local health professional prior to travel if you are unsure.

Many hospitals have been destroyed in Syria and those that remain are very poor quality which are often subject to mortar attacks. It is difficult for hospitals to get the right equipment and supplies they need to function properly, they rely heavily on aid and donations which have become less consistent in recent years. If you go against the advice of the British FCO and do decide to travel to Syria, be sure to take adequate medical supplies and personal medication for your trip.

Many doctors and other health professionals have become high priority targets of kidnappings from the terrorist organisation Daesh. There have been several recent incidents of local doctors and nurses being kidnapped and later executed. The result of this means there is a huge shortage of much needed health care professionals among the few remaining hospitals in the country.

The destruction of medical infrastructures has resulted in regular outbreaks of infectious diseases across the country. Dead bodies are often left unattended and can easily spread life threatening diseases such as typhoid fever, cholera and plague. You should take precautions against such dangerous biohazards.

The information contained in this Travel Advice for Syria is provided for information only. Whilst care is taken to ensure that this country brief is as up-to-date and accurate as possible, it is provided on an "as is" basis without any representation or endorsement made and without warranty of any kind, express or implied. Intelligent Protection International Limited does not assume responsibility and shall not be liable for any damages in connection to the information provided.