Security Services for the 2018 World Cup

If you require any Security Services in particular Close Protection Bodyguards for the 2018 World Cup in Russia, Intelligent Protection International Limited can provide these services for you with co-coperation of trusted local partners. Further to this, we can also provide full Logistical support and of course airport transfers. For more information about these services, please see our page: Bodyguard Services in Russia.

World Cup security
Russia will be hosting one of the biggest and most anticipated tournaments across the world when the World Cup comes to the country. With the finals expected to take place in Moscow at the Luzhniki Stadium, the world cup will be played in 12 venues across 11 cities including:


The 2018 Russia World Cup will be the first World Cup to be held in Europe since 2006. The last games Russia hosted was the Winter Olympics and Paralympic games in Sochi. Therefore, Russia has had prior experience of major events and they will take into consideration events such as Euro 2016 and Rio Olympic Games 2016 in order to avoid any repetitions of such incidents.

For information on the dates and venues of matches, see: Russia 2018 World Cup Visa Game Info

On Saturday the 16th of June 2018, a Moscow taxi ploughed into a group of Mexican fans in Moscow. The driver fled the scene but has since been caught by Police. It is understood that he had a Kyrgyzstan driving licence.

It is estimated that the event’s budget for the infrastructure of the World cup will be about 660 billion rubles ($103 billion) but is expected to increase due to the need for certain imports related to construction projects.

There has been growing international concerns of corruption with the World Cup projects and construction delays have been set back by the current economic crisis. The budget deficit is thought to be around $51 billion. This has forced the government to bring several cuts on the stadium including suggestions such as the use of cheap prison labour to help with the construction, keeping costs to a minimum.

It has been noted that for the World Cup 2018, Russia will be implementing a “comprehensive security concept” in order to prevent a repetition of issues faced during the European championship in France, June 2016. During the Euros 2016, Russian fans were at the centre of troubles and violence which led to a suspended disqualification and a 150,000 euro ($167,392) fine for the Russian Football Union.

Russia 2018 security concerns
Security during the 2018 World Cup in Russia will be of major importance and will prove more complicated than the Winter Olympics as it is spread across 11 cities. During the Olympics, security protection was tight around Sochi. Every vehicle that entered the city was thoroughly searched and Russians needed special passports to travel to the region.

Controversial issues that have been raised for the World Cup in Russia are the level of racism in Russian football, discrimination against LGBT and Russia’s involvement in the ongoing conflict in Ukraine and the annexation of Crimea.

Russia is known as having one of the highest hate-crime rates in the world and there has been a rise in racist murders, often targeting people from Caucasus and ex-Soviet republics in central Asia and right-wing activity across the country. There are more than 150 far-right groups with an ideology of racial, ethnic and religious intolerance that are currently active in Russia. It is worth noting that although homosexuality is legal in Russia, it is still not widely accepted in some parts of Russia. There have been a few reports of harassments, threats and acts of violence towards the LGBT community. Those planning to visit Russia during the 2018 World Cup should be aware of this; be wary of any public display and cautious of potential racist violence.

Russia has military involvement in several countries, in particular, Ukraine and Syria. In 2014, Russia has made several military interventions into Ukrainian territory which remain today. The Ukrainian crisis could pose as a potential threat to the 2018 World cup with the possibility of terrorist action during the event.

Russia has also intervened in the Syrian Civil War in 2015 after an official request by the Syrian government for military help against rebel and jihadist groups. This may raise the likelihood of an Islamic State (ISIL) attack, targeting popular attractions such as the 2018 World Cup.

According to a report by Germany’s Federal Criminal Police Office, the risk of terror attack at the tournament is high. With about 4,500 ISIS jihadists going back to Russia from Syria and Iraq, militants could seek to avenge Russian attacks against ISIS in Syria.

Travel considerations
Language is a huge barrier in Russia as over 81% only speak the official language of Russian. There are only over 100 minority languages spoken in Russia today, the most popular of which is Tartar, spoken by more than 3% of the country’s population. Although English is spoken by some, you should not rely on this and it is advised that you learn a few basic Russian phrases.

Travellers to Russia should be wary of their surroundings, particularly in the zones where the games will be held. Make sure to plan your journeys ahead in order to avoid any complications.

Be on high alert of the possibility of mugging, pick-pocketing and theft from vehicles or hotels rooms especially in busy crowds.

In Saint Petersburg there have been reports of street crime where tourists have been specifically targeted. As one of the stadiums is located in St Petersburg, it is recommended to take extra precaution when travelling around this area.

If you plan to drive in Russia, most foreign nationals, including US, UK and EU visitors can use their national driving licence but it is recommended to also purchase a notarised Russian translation.

Road safety is poor in Russia and the number of road accidents is particularly high. There were over 198,000 road traffic accidents in Russia in 2014, causing over 26,000 deaths. Be observant of other drivers and avoid driving at night.

If travelling between the games, be aware that roads will be highly congested and often dangerous with supporters. Travellers will be unknown to the roads so take extra care whilst driving. Above all, take into account the distance of each venue. Sochi to Saint Petersburg is 2338.6 km with an average travel time of 27h 33 minutes. Ensure you have adequate provisions for all journeys.

You may want to consider rail travel between destinations. There are overnight trains with sleeping compartments that may be the most efficient and safest way when watching the games at the World Cup. If using rail travel, do not leave your sleeping compartment unoccupied and do not agree to look after the luggage of a fellow traveller. 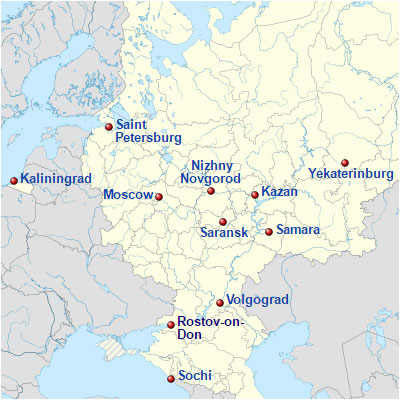 Visa requirements
Only travelers with tickets to the games will have a visa free entrance to the country with their FAN ID. Others visitors will need regular visa. Be advised due to the increase number of people travelling, extra time will be needed to obtain visas. Further information, see: Russia 2018 World Cup Visa info

Immunisations
It is advised that all visitors to Russia seek medical advice at least 4 - 6 weeks before your trip in order to be up-to-date with all inoculations including: Hepatitis A, Hepatitis B, Tetanus, Rabies and Typhoid.

Medical Care and Travel Insurance
In Russia, most areas of medical care are below Western standards due to the lack of supplies and comprehensive care. Bigger cities like Moscow and St. Petersburg may have higher facilities standards but do require cash or credit card payment at Western rates at the time of service. When visiting the doctor, make sure to provide your insurance cover in order to determine the level of medical available.

As of June 2016, legislation was introduced requiring travellers bringing prescribed medicines to carry a prescription with the following requirements: the traveller’s name, the name of the drug and the prescribed quantity. If this is not provided in Russia, a notarised translation is also required. If unsure whether a prescription is required with your medication, check with the nearest Russian Embassy.

It is worth noting that dental care in Russia is quite expensive and most citizens cannot afford the treatment. You should make sure you have comprehensive travel insurance.

Bear in mind that most travel insurance policies will not cover drink or drug related incidents.

Other health risks
Botulism, Crimean Congo Haemorrhagic fever, Tick-borne Encephalitis, spread mainly through the bite of an infected tick. Risk is higher during the warmer months, for those exposed outside in forests, woods, and grassy areas. Updated information associated with Russia can be found here Russia Travel Health Risks.

Tap water is not drinkable throughout the Russian Federation and should therefore only drink bottled water. Botulism, Crimean Congo Haemorrhagic fever, Tick-borne Encephalitis, spread mainly through the bite of an infected tick. Risk is higher during the warmer months, for those exposed outside in forests, woods, and grassy areas, regular skin inspection should be undertaken and immediate removal of ticks done in an appropriate manner. Updated information associated with Russia can be found here: Russia Travel Health Risks.

The information contained in this country brief is provided for information only. Whilst care is taken to ensure that this country brief is as up-to-date and accurate as possible, it is provided on an "as is" basis without any representation or endorsement made and without warranty of any kind, express or implied. Intelligent Protection International Limited does not assume responsibility and shall not be liable for any damages in connection to the information provided.