Olympic security
The opening ceremony of the XXXI Olympiad will take place on the 5th of August at the famous Maracanã Stadium in Rio de Janeiro.

Any major international event has its security concerns, policing the Rio de Janeiro 2016 Olympic Games is an enormous challenge for the Brazilian security forces, but as the country proved in policing the 2014 World Cup, it is capable. It is said that some 80,000 security personnel will be deployed each day, this is a considerable rise on the 42,000 military, police and security personnel that were deployed per day during the 2012 Olympic Games in London.

There has already been some internal and external criticism of the security planning for the 2016 Olympic Games in Rio, the terror threat is though overshadowed by the health risk of the Zika virus, a virus spread by mosquitoes discovered in Uganda in 1947.

In the lead up to the games, security operations were carried out in Rio aimed at cleaning up violent favelas, areas with a rich history of drug and gang culture, many were under the total control of cartels and drug traffickers.

English is not widely spoken in Brazil, so it is advised that visitors learn some basic Portuguese and make use of a phrase book.

Rio security concerns
There have been reports of a numbver of robberies from competitors and other visitors during the games. News reached the media that 4 American athletes had been robbed at gunpoint however it has emerged that this was a lie to cover up an altercation the athletes had got into at a petrol station. One of the men involved still has not had his passport returned by authorities whilst the other three men have travelled back to America. They could face criminal charges.

All visitors to the country should be aware of thieves posing as police officers. Do not travel anywhere alone and stay vigilant at all times. If you are pulled over by police, it is advised that you do not resist as there is a high chance that they will be armed.

Rio and much of Brazil suffers from very heavy traffic and this is a concern from a logistical and security point of view. Vehicles being held up at gun-point is a real issue in Brazil. Different scenarios have been reported including car-jackings carried out by corrupt police and by motorcycle gangs, making use of the heavy city traffic.

Since the "Bastille Day" ISIS attack in Nice, France on the 14th July 2016, there has been an increase in concern about an Islamic State attack on the games in Rio. A group with links to ISIS; Ansar al-Khilafah Brazil has in recent weeks pledged allegiance to ISIS and made a statement that it would “wage jihad against the enemy of Allah”. It is not known if this group has the ability to launch any attacks, but as the Nice, France attack showed, the modus operandi and execution of an attack can be successful if simple.

In July 2016, an athlete from New Zealand who had travelled to Brazil to compete in the games, reported that he had been 'abducted' by men dressed as policemen and taken to a two separate ATM machines where he was forced to withdraw large amounts of cash (equal to around £500). He reported that the dressed up fake policemen threatened to arrest the athlete if he did not comply with their demands. Visitors to the Olympic Games are advised to remain extremely aware of your surroundings at all times and avoid travelling alone at all times.

In 2010, a British Formula 1 racing driver was travelling back from a qualifying race in Sao Paulo; when the car he was travelling in slowed for traffic lights. At the roadside weapons were pointed at the vehicle. No shots were fired and his driver was able to get the Formula 1 star back to the team hotel safely. It is thought that this could have been due to information being leaked from staff at the racetrack to local gangs as to when the Formula 1 stars were leaving the venue.

Recently a Spanish sailing medallist had been robbed at gunpoint in the area of Santa Teresa district, which is popular for tourists. Please take caution, and it is advised not to resist in such incidents.

Gun crime is rife across the whole of Brazil, the country has a history of gun crime, 2012 saw 42,416 gun related deaths alone. A recent report stated that "Brazilian society generally condones the use of violence to resolve interpersonal disputes, such as road rage incidents or personal arguments".

Visitors should take care at night when venturing out to restaurants and clubs. Rio uses Yellow cabs with a blue strip on the side. These are official licensed taxis, make sure that there is a company name written on the side of the cab. It is strongly advised that taxis are used even for the shortest of distances, especially when travelling to unfamiliar places.

Travel considerations
Travellers to Brazil should take care to be aware of their surroundings at all times and think one step ahead.

There is a high threat of robberies and assaults across Rio de Janeiro and on the transport network, even though much work has been done to better police Olympic and tourist areas vigilance is required at all times.

The four main Olympic venues have great transport connectivity, a high standard of what would be expected for an Olympic host nation. Industrial disputes and strikes have been known to affect public transport, but no known action is planned (as yet) for the period of the Rio Olympic Games. Care should be taken during busy periods as public transport is often targeted by petty thieves and pick-pockets.

Driving in Brazil can be dangerous, think "passive aggressive" if you are going to self-drive in Brazil. The number of incidents of deaths on the roads in Brazil is quite high, up to 40,000 deaths per year (compared to around 2000 in the UK). The road infrastructure and standard of driving is very poor throughout the country and worse in rural areas.

Car hire is good value, it is advised to use international firms and to book in advance. If you are going to self-drive ensure that you have a good satnav, a first aid pack in the vehicle and that you plan your route. Keep the doors of the vehicle locked at all times and do not leave valuable items on show. 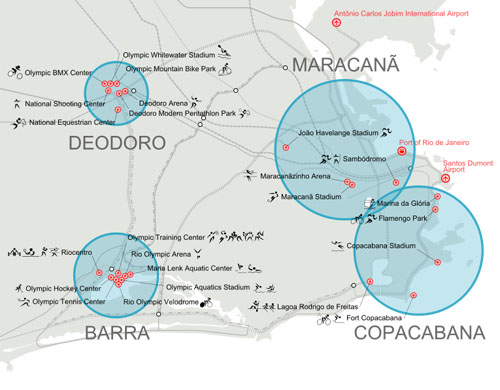 Visa requirements
During the run up to and the duration of the Olympic Games, Brazilian authorities have temporarily waivered visa requirements for many citizens who would otherwise be required to provide one. This is to reduce work load and encourage tourism to the country. Between June 1 and September 18, 2016, tourists will be able to enter the country for up to 90 days visa free.

Immunisations
It is advised that visitors to Brazil are up-to-date with primary boosters such as MMR. It is further recommended that most travellers get Tetanus and Hepatitis A vaccinations. You may also want to consider getting vaccination against Yellow Fever.

Areas where there is a low risk include: Fortaleza, Recife, Rio de Janeiro, Salvador and Sǎo Paulo. You will not need vaccinating if you will be staying predominantly in these areas. You should check with your local health professional prior to your departure as the Yellow Fever vaccine is not suitable for all travellers.

Other health risks
It is advised that all visitors to Brazil take precautions against Mosquito borne diseases such as Malaria, Zika virus and Dengue fever.

There is no vaccine or medicine to cure of treat the Zika virus so great care and caution is advised. Up-to-date information from the World Health Organisation can be found here: Zika virus facts.

The viral illness Dengue Fever is transmitted to humans by mosquito bites and is an issue in Brazil. Although there is no vaccine, precautions such as sleeping with a mosquito net and wearing suitable clothes can prevent bites. More information on Dengue fever can be found here: Dengue Fever facts

Schistosomiasis (parasitic infection also known as bilharzia) is also an issue, so contact with fresh water including activities such as swimming, bathing or paddling in fresh water lakes and streams is advised against.

Personal hygiene must be paramount, the local water supply avoided at all costs and bottled water inspected prior to consumption. There have been a number of reports of bottled water being refilled with tap water and re-sold.

Even though the Olympic Committee has taken great strides to clean Brazil’s waters there is a risk of various strains of bacteria infecting persons. This is from contaminated sewage and waterways that flow into the areas near Rodrigo de Freitas lagoon, Guanabara Bay, Copacabana, Ipanema, Leblon, Botafogo and Flamengo. It is best not to ingest the waters, to make sure that hands are washed frequently and use medical alcohol wipes to prevent severe illness.

The information contained in this country brief is provided for information only. Whilst care is taken to ensure that this country brief is as up-to-date and accurate as possible, it is provided on an "as is" basis without any representation or endorsement made and without warranty of any kind, express or implied. Intelligent Protection International Limited does not assume responsibility and shall not be liable for any damages in connection to the information provided.

Healthcare in Brazil can be very much hit and miss if you are in a rural area and in cities hospitals can run short of supplies and be overcrowded.